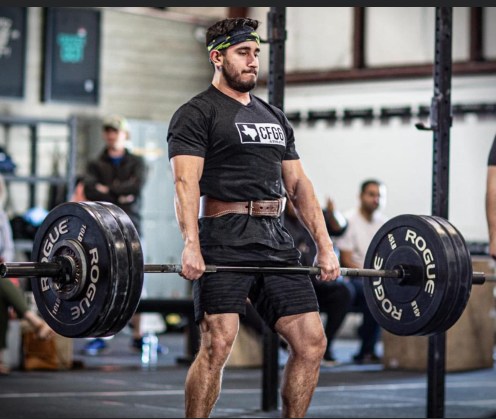 I grew up in Southern California near LA. I always enjoyed playing sports with friends growing up but never played any organized sports. Rather I played a lot of music, like drums and guitar, growing up and that was a big part of my life. When I was 20 I found out about CrossFit on YouTube and watched many videos on it. Mostly the games. After two months of watching CrossFit videos, I decided to give it a try and started my CrossFit journey in March of 2016. I was hooked immediately. About a year later I had the opportunity to move to Texas and took that opportunity. The first week of living in Texas I went to a couple different CrossFit gyms and landed on CrossFit G6. The coaches and owners were awesome people and the community was very welcoming. It didn’t take long for me to feel like G6 was home. After a few months of being at G6, I was provided the opportunity to coach. So I went and took my L1 and began doing some Assistant Coach duties and eventually working my way into coaching full-time. It's already been 3 years and it's been awesome. I can't imagine doing different and definitely can't imagine being anywhere else but G6.

When I moved to Texas from California I was 21 and on my own for the first time. Well sort of. I had awesome friends to help along with my start and stay in Texas and couldn’t be more grateful for them. I realized though that a lot of the things I did were because my parents pushed me when living with them. Now that I didn’t have that I fell into a repetitive slump of just going through the motions and it was not good. The one thing that changed that around was my awesome girlfriend. Dating her helped me remember that it’s not all about me. She helps challenge me to be better as a person and an athlete and a coach and more. Since meeting her my life has been improved, to say the least, and she helped me get out of my funk and into a life of meaning whether it be small or big.

I love coaching because it gives me an opportunity to help people grow whether it be physically or just as important, mentally. That’s what motivates me to coach. I enjoy helping athletes achieve a goal they set out for themselves for the year or accomplish something they never thought possible for them. I enjoy breaking down a movement piece by piece to help an athlete better understand that movement. Some athletes need a little push to see that they are capable of more than what they believe of themselves and I’m here to help with that.